The mission of the Network's Education & Outreach program is to improve the fairness and effectiveness of the criminal justice system by introducing judges, lawyers, and others in the legal and criminal justice communities to the promise and limits of integrating cognitive neuroscience with law. To accomplish this mission, the Network is developing a focused and coherent curriculum, integrating emerging insights from Network researchers. The curriculum will be used at the Network's education and outreach events, described below, and is also being developed for wider dissemination. 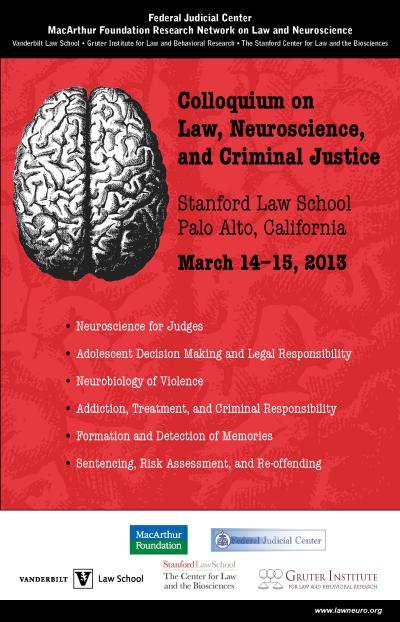 On March 14-15, 2013, the Network hosted a Colloquium on Law, Neuroscience, and Criminal Justice, in partnership with the Federal Judicial Center, Vanderbilt Law School, The Gruter Institute for Law and Behavioral Research, and the Stanford Center for Law and the Biosciences. The Colloquium was held at Stanford Law School. The day and a half program featured the Network's new curriculum. Leading thinkers in science and law covered topics such as: an introduction to cognitive neuroscience for judges; criminal decision making; the addicted brain; the developing brain; and evidentiary issues surrounding neuroscientific evidence.

On April 27, 2013, in partnership with the American Bar Association and Vanderbilt Law School, the Network hosted a one-day conference in Chicago: The Future of Law and Neuroscience. The program featured a law and neuroscience curriculum specifically designed for lawyers, and drew on new research from the MacArthur Foundation Research Network. Topics covered include: an introduction to cognitive neuroscience (including brain imaging techniques) for lawyers; decision making; the developing brain; memory and lie detection; and evidentiary issues surrounding neuroscientific evidence.

On September 26-28, 2013, the Network co-sponsored Treating the Criminal Offender Brain:  Can We?  Should We?   at the University of Minnesota.

Click here to visit Treating the Criminal Offender Brain:  Can We?  Should We? conference website, conference agenda 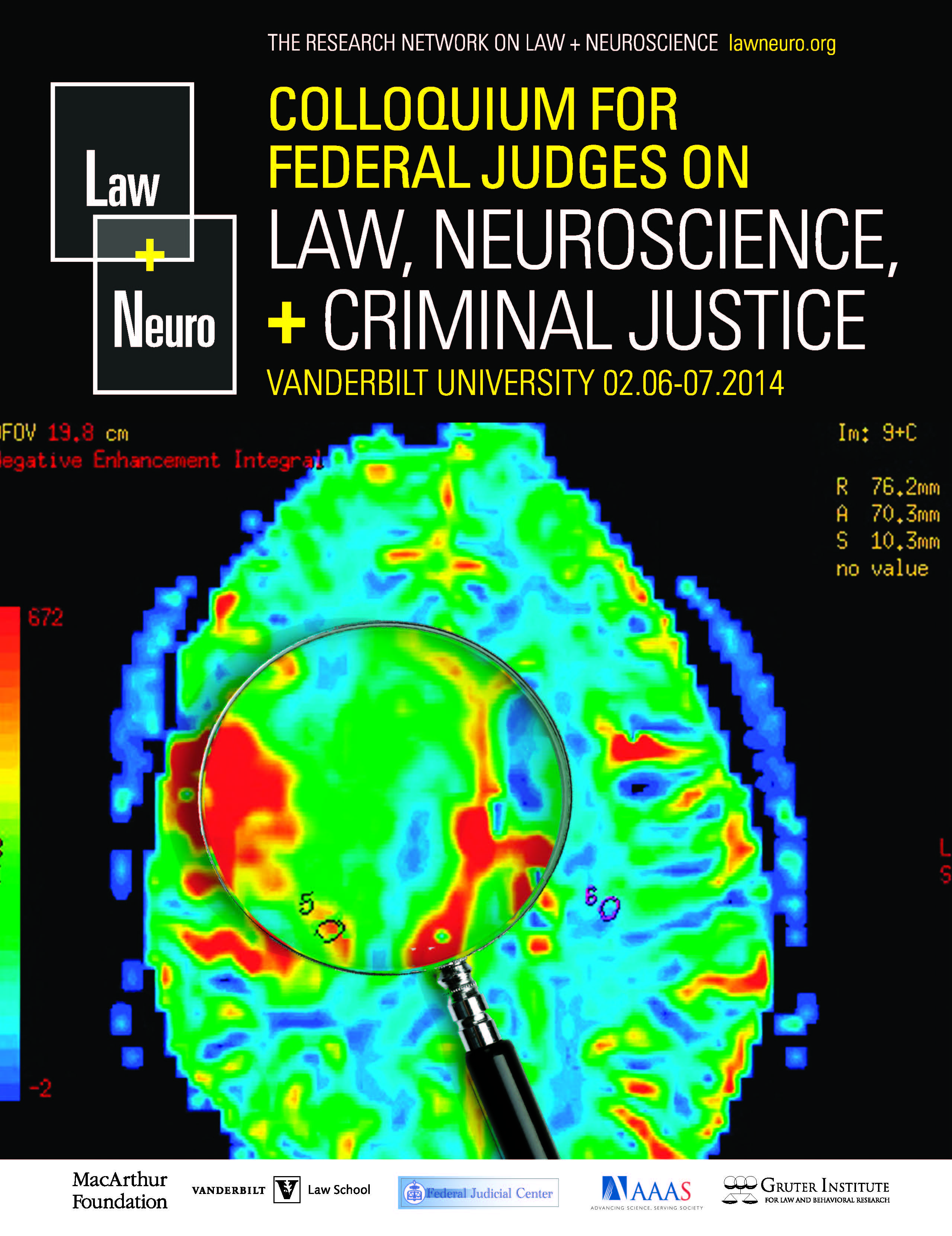 On February 6-7, 2014, the Network hosted a Colloquium on Law, Neuroscience, and Criminal Justice, in partnership with the Federal Judicial Center, Vanderbilt Law School, the American Association for the Advancement of Science, and the Gruter Institute for Law and Behavioral Research. The Colloquium was held at Vanderbilt Law School. The day and a half program featured the Network's curriculum specifically designed for the federal bench. Leading thinkers in science and law presented on the following topics: Why Law and Neuroscience?; What Will You See in the Courtroom?  The Brain on Trial; Juvenile Justice:  Adolescent Decision Making and the Law; Addiction:  Treatment, Responsibility, and the Law; Brain Dysfunction, Psychological Syndromes; and Memory, Punishment, and the Law.

Information on these events is publically available.  In addition to these events, Network members regularly present on law and neuroscience in smaller forums. If you have questions about an event, corresponding materials, or about contacting individual speakers, please contact Sarah Grove, Executive  Assistant for the MacArthur Foundation Research Network on Law and Neuroscience.

The Education and Outreach program also disseminates information through the Network's email list-serv.

The Network’s curricular materials will be made available on this site. These materials include:

The curriculum will also draw from this collection of introductory law and neuroscience resources.

The Neuroscience Boot Camp faculty consists of leaders in the fields of cognitive and affective neuroscience who are committed to the goal of educating non-neuroscientists.  Through a combination of lectures, break-out groups, panel discussions and laboratory visits, participants gain an understanding of the methods of neuroscience and key findings in cognitive and social-emotional functions of the brain, lifespan development and disorders of brain function.  Break-out groups will allow participants to delve more deeply into topics of relevance to their fields.  Laboratory visits will include a trip to an MRI scanner, an EEG/ERP lab, an animal neurophysiology lab, and a transcranial magnetic stimulation lab.  If you are a legal scholar or lawyer interested in attending Neuroscience Boot Camp, please contact  Sarah Grove, Executive Assistant for the Network on Law and Neuroscience.

Dr. Francis X. Shen, Executive Director. Dr. Francis X. Shen is an Associate Professor at the University of Minnesota Law School. Professor Shen conducts empirical and interdisciplinary research at the intersection of law and the brain sciences. He is co-authoring the first law coursebook on Law and Neuroscience (forthcoming, Aspen Publishers, 2013), and has explored the implications of cognitive neuroscience for criminal law, tort, and legislation in the United States. Additional research areas of focus are criminal law and crime policy, and education law and policy. Professor Shen completed his B.A. in economics and English at the University of Chicago in 2000, his J.D. at Harvard Law School in 2006, and his Ph.D. in government and social policy at Harvard University and the Kennedy School of Government in 2008. During graduate school he was a doctoral fellow in the Harvard University Multidisciplinary Program in Inequality & Social Policy, supported by the National Science Foundation. His research has been published in a variety of outlets in law, political science, psychology, and education, and he has co-authored two books, The Education Mayor (Georgetown, 2007) and The Casualty Gap (Oxford, 2010). In 2009 he joined the MacArthur Foundation Law and Neuroscience Project, at the University of California Santa Barbara, as a post-doctoral research fellow. In 2010-11 he became associate director of the Project and a visiting scholar at Vanderbilt Law School. In 2011-12 he was a visiting assistant professor at Tulane University Law School and The Murphy Institute.

Monika Gruter Cheney, Senior Director . Monika Gruter Cheney became Executive Director and President, Board of Directors of the Gruter Institute in August 2003. Prior to her appointment as Executive Director, she served as the Institute's Associate Director. Before joining the Gruter Institute in this capacity, Ms. Cheney practiced in the intellectual property and technology transactions group at Wilson, Sonsini, Goodrich, Rosati in Palo Alto, California. Representative transactions included licensing, development, service, distribution, manufacturing, electronic commerce and corporate partnering and merger agreements for clients ranging from Fortune 500 companies to early stage technology and bio-tech start-ups. Ms. Cheney also practiced in the litigation department of Thelen Reid & Priest, focusing primarily on commercial and government contracts defense litigation. During her years of legal practice, Ms. Cheney was actively engaged with the Gruter Institute in her capacity as Secretary of the Board, chair of conference planning, legal counsel and research consultant. Ms. Cheney earned her J.D. in 1998 from Georgetown University Law Center, where she served on the Georgetown International Environmental Law Review. Ms. Cheney externed for the Honorable James R. Browning, United States Court of Appeals for the Ninth Circuit. She earned her B.A. in Philosophy, Politics and Economics and International Relations from Claremont McKenna College in 1995. Ms. Cheney is actively involved in all research initiatives of the Gruter Institute. Her research focus has included: property, intellectual property and the brain; behavioral building blocks of successful markets (that is, what behavioral building blocks – e.g. trust, reciprocity, cooperation and self-interest - are necessary for successful markets and a free enterprise system generally to work); and fostering continued research and teaching in law and biology.

Oliver Goodenough, Senior Director . Oliver Goodenough is a Professor of Law and the Director of Scholarship at Vermont Law School. His research and writing at the intersection of law, economics, finance, media, technology, neuroscience and behavioral biology make him an authority in several emerging areas of law. He is an expert in the impact of digital technology on law, with a particular emphasis on using the internet to create digital business organizations and to improve the support provided by law for innovation and entrepreneurship generally. A pioneer in Neurolaw, he has participated in experiments using fMRI brain scanning techniques to explore the neurological basis of moral reasoning in conjunction with Humboldt University in Berlin and the University of London.

He is also currently a Faculty Fellow at The Berkman Center for Internet & Society at Harvard University, where he is co-director of the Law Lab project, a Research Fellow of the Gruter Institute for Law and Behavioral Research, and an Adjunct Professor at Dartmouth's Thayer School of Engineering. He has also been a Visiting Research Fellow at the Zoology Department of the University of Cambridge, a Lecturer in Law at the University of Pennsylvania Law School and a Visiting Professor at the Neurological Department of the Charite Medical School of Humboldt University in Berlin. He has participated as faculty for The National Judicial College since 2004. Prof. Goodenough has also served as co-director of the Education and Outreach Program of the MacArthur Foundation Law and Neuroscience Project.

Professor Goodenough has written on a wide variety of subjects relating to law, business, the internet, and cognitive and behavioral science. His chapter "Digital Firm Formation" in the Kauffman Foundation book Rules for Growth (2011) has sparked reforms in corporate law. Law, Mind and Brain, co-edited with Michael Freeman, was published by Ashgate in February, 2009. With Semir Zeki, he edited the 2004 special issue of the Philosophical Transactions of the Royal Society devoted to Law and the Brain, reprinted in book form under that title by Oxford University Press in 2006. He is co-author of This Business of Television, now in its third edition, and his co-edited volume Educating the Digital Lawyer has been published as an e-book by LexisNexis in 2012.  His shorter works include articles and chapters on law and neuroscience, intellectual property, the transmission of culture, and, with Richard Dawkins, a report in Nature on chain letters as evolving 'mind viruses'.

Professor Goodenough received his B.A. from Harvard University and his J.D. from the University of Pennsylvania. After graduation, he practiced law in New York, first as an associate with Cleary, Gottlieb, Steen & Hamilton and then with Kay, Collyer & Boose, where he became a partner. In 2000 he won the Lee Loevinger Jurimetrics Research Award for his work on law and neuroscience, in 2002 the Gruter Institute Bene Merenti Award for outstanding achievements in law and behavioral research, and in 2010 the Vermont Law School Richard Brooks Faculty Scholarship Prize for scholarly achievement.